We are yet to see the final stats that will reveal just how big 2020’s pandemic-induced city-exit was, but anecdotally, it’s the talk of the town

“In the last month, we’ve sold two homes to Melbourne buyers, both purely from FaceTime walk-throughs,” says Bendigo real estate agent Darryn Mawby. “The buyers won’t even be able to do a final inspection prior to settlement because of the Melbourne lockdown, so the first time they get to see their new homes in person is when they pick up the keys.”

He sounds incredulous. “Would you make the biggest purchase of your life sight unseen?”

But in 2020, it seems all the normal rules around choosing your next home have changed.

Echuca Moama agent Troy O’Brien says in his 22-year career he has never seen as many properties sell sight unseen. Last week a Melbourne buyer attended an online auction and paid $115,000 to secure a riverfront property he had only viewed on FaceTime.

“Locals are scrambling to buy something now before it (Melbourne) opens up,” he says. “The pandemic has pushed the local market forward by about ten years.”

For many city dwellers, COVID-19 and its accompanying lockdowns and work-from-home (WFH) protocols have raised real questions about the desire to remain in expensive, crowded metropolitan areas when fresh air, vastly reduced commuting times, and more affordable housing is available in thriving, friendly regional towns.

The movement of people from Australia’s big cities to towns on the coast and in the country had already begun before the pandemic, but a slow march now appears to have become double-time.

“We won’t really know the full extent of any movement until we get updated Australian Bureau of Statistics data next April,” says Eliza Owen, Head of Research, Australia, for property analyst CoreLogic. “But when we look at change in value, for example, we can see that since March prices in regional NSW have increased by 2.1 per cent, compared to a 2.5 per cent drop in Sydney property values.”

It’s a similar story for those who prefer to try-before-they-buy, renting in regional areas before making a more permanent move.

Investment research firm SQM Research published figures in October that showed a marked discrepancy between rental vacancies in capital cities and regional centres. While vacancy rates in inner-city Melbourne and Sydney soared to 9 per cent and 12 per cent, respectively, an area like the NSW Central Coast was at an extremely low 0.5 per cent.

“Bendigo was a hot spot before COVID. But it’s noticeable that we are now having our turn to shine.”

“Outside Sydney and Melbourne, vacancy rates are falling again,” said SQM founder Louis Christopher. “Regional vacancy rates have fallen below 1 per cent which really represents the point of little to no rental vacancy. In short, in September the population was still looking to stay away from the large cities.”

The new director of the Benalla Art Gallery Eric Nash discovered the reality of a tight rental market when he moved to the popular north east Victorian town last October. There were only two houses on the market for rent, but only one was comfortably habitable. In April, Eric and his wife welcomed their first child and decided to buy in the area. That too was difficult.

“The property market in Benalla was already booming when we moved here a year ago, but it’s pretty insane at the moment. Places are being listed for sale and sold within a week,” he told Wattle Road.

CoreLogic has identified its regional hot spots across Australia based on the change of property values in Local Government Areas between March 31 and September 30.

In NSW, the Western Plains LGA, which includes the towns of Dubbo and Wellington, has seen a 7.8 per cent increase in dwelling price, closely followed by Eurobodalla on the south coast at 6 per cent. In Victoria, the growth areas are in South Gippsland (1.5 per cent) and Greater Bendigo (1.3 per cent).

Gympie (4.9 per cent) and Noosa (2.6 per cent) are Queensland’s star performers, while South Australia’s Yorke Peninsula, opposite Adelaide on the St Vincent Gulf, has seen a 13.7 per cent increase in prices. The Huon Valley LGA, on the southern tip of Tasmania, was that state’s highest growth area, with a 9.4 per cent price gain. There were no increases in values recorded in Western Australia or the Northern Territory.

“It would make sense for things like transport and social infrastructure to come into play when people are making decisions,” she said. “The flexibility offered by major regional centres like Geelong, Newcastle and Wollongong in commuting distance to CBDs is a potentially mitigating factor.

“And for people working from home, a good internet infrastructure is vital”.

Bendigo, 150km north of Melbourne and a two-hour commute by train or car, is the quintessential model of the type of destination Australia’s new WFH warriors are seeking out.

A thriving regional centre with a population of 110,000, it offers a variety of housing options, from classic Federation properties in the busy town centre, to new house and land developments in outlying suburbs like Strathfieldsaye and country lifestyle acreages in colourfully-named hamlets like Axe Creek. A median dwelling value of $383,096 also makes Bendigo an affordable option.

Known for its gold rush origins, the birthplace of the Myer department store chain and for its eponymous bank, Bendigo has an abundance of vital infrastructure. There are well-regarded private and public schools, and a La Trobe University campus of 4000 students, with courses in pharmacy, dentistry, law, health, engineering, and science. The $630 million Bendigo Hospital was opened in 2018, becoming the largest regional infrastructure project in Victoria’s history.

Most importantly, the NBN rollout to most parts of Greater Bendigo was completed earlier this year, connecting more than 45,000 homes and businesses to fast, reliable internet.

“It’s the first question people ask,” says Darryn Mawby of the NBN rollout. “Buyers are looking for places where they can work from home.”

Darryn says it’s not just Melburnians who are looking to make the move, with buyer’s advocates from as far away as Sydney and Brisbane making enquiries about the town.

“Bendigo was a hot spot before Covid,” he says. “But it’s noticeable that we are now having our turn to shine.”

Search data from property portal Domain shows that between February and July, the number of views per listing in Bendigo rose 62.8 percent.

How to find the right town for you

Weighing up a life-changing move 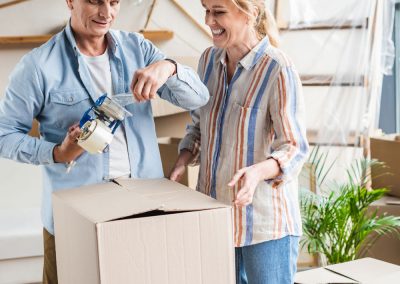 Top 10 tricks to packing up