Where the locals welcome you with open arms

Chiltern, in the north-east of Victoria, is an historic village, its streetscapes a reminder of the gold found in the hills and valleys around these parts. Quartz followed gold and at its peak, the town boasted 12 hotels and three banks.

Today the town, nestled in the hills of the Chiltern-Mt Pilot National Park, is home to 1700 people.

Maybe you’ve never taken the turn-off on the Hume, but continued on to Albury-Wodonga or Sydney. When you do discover Chiltern for the first time, you’ll shake your head in wonderment. How had you missed it? There is so much here.

If you’re after a small community, with a great feel, lots of buzz, warm weather, plenty of outdoor activities and yet within easy striking distance of a city or two, Chiltern could be what you’re looking. It helps that it’s strikingly beautiful, and the locals are enthusiastic ambassadors for its charms and understand the value of encouraging newcomers and visitors.

Chiltern is a magnet not only for those wanting to get a feel for the early European settlement fuelled by the discovery of gold, but also for its physical beauty. Cyclists have almost 22,000 hectares of bush to explore with seven cycling routes of varying lengths beginning in the town. It’s not uncommon to see a gaggle of bikes and lycra-clad cyclists refuelling at the bakery.

Bushwalkers trek the tracks through the National Park with its forests of box and ironbark, and plenty of wildlife to look out for, including 200 bird species. Points of interest include Cyanide Dam, an open-cut mine, an Aboriginal art site, waterfall and lookout spots. 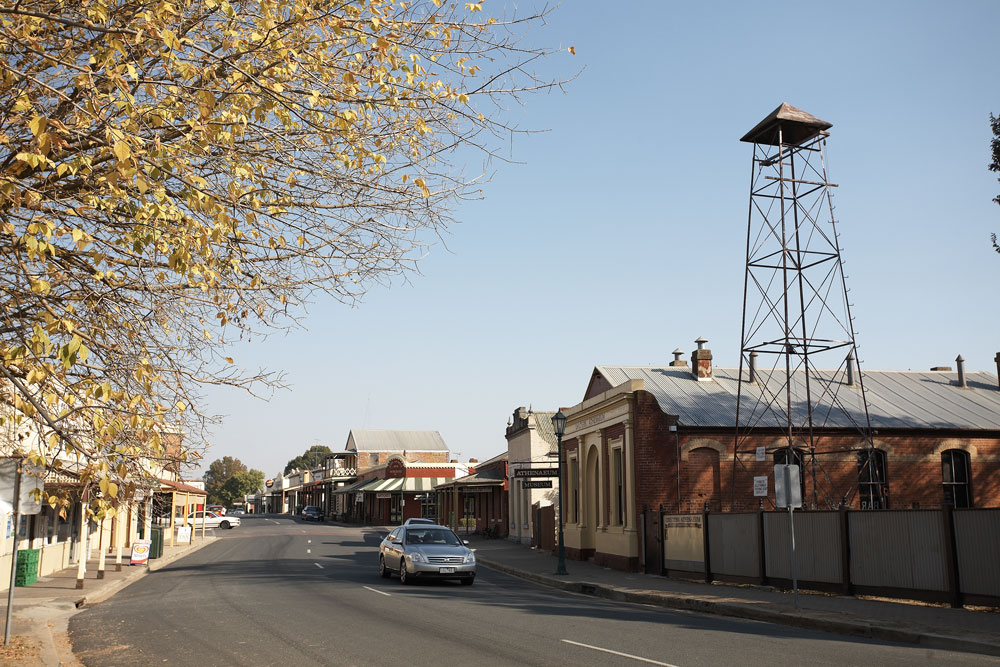 “It’s definitely great having the train line here which makes us accessible for people in Melbourne. That’s a real bonus.”

Chiltern has a swimming pool and an ornamental lake that provides a haven for birdlife and a site for the annual vintage car rally. There are a monthly produce and craft market, a pharmacy, newsagency, supermarket, bakery, butchers and antique and collectables shops. There is also a honey farm gate, a couple of great cafés, a new wine bar, two hotels, a neighbourhood house and three art studios. At Christmas, the locals gather for the family street party.

While primary school-aged children are catered for in Chiltern, there is the need to travel for secondary education. But with plenty of tertiary education opportunities available in Albury-Wodonga, there is no need for young people to leave home to get access to further education.

For those looking for property, it’s important to remember this is a small town with not much stock and it moves quickly.

In town, houses are usually older character homes while those looking for some acreage will find more contemporary homes. Occasionally there will be small plots of land in town, subdivided off existing houses with already established gardens. If you are lucky enough to find one of these, you might find yourself wanting to leap at the chance to relocate.

House prices in Chiltern increased by 8.9 percent in the last year, with the median house sale price now sitting at $332,000.

There’s an airport in Albury, the V/Line train stops in Chiltern and goes to the twin cities of Albury-Wodonga in one direction and to Melbourne in the other. The train takes a little more than four hours to reach Southern Cross station. Buses connect Chiltern to some neighbouring towns.  Good public transport links are useful for young people accessing school, part-time employment and social opportunities.

The Traditional Custodians of the land on which Chiltern stands are the Dhudhuroa people.

WATTLE ROAD 🖤 Friendly locals and the beauty of this historic village.
DISTANCE FROM MELBOURNE: 268 km
POPULATION: 1700
WHO LIVES HERE?
♦ The median age of people in Chiltern was 47 years. Children aged 0 – 14 years made up 17.3% of the population and people aged 65 years and over made up 19.5%.
♦ Of the families in Chiltern, 39.2% were couple families with children, 48.1% were couple families without children and 12.0% were one parent families.
♦ 82.3% of people were born in Australia. The most common countries of birth were England 3.6%, New Zealand 0.9%, Germany 0.9%, Netherlands 0.4% and United States of America 0.3%.
♦ The most common occupations include technicians and trades workers 15.7%, labourers 14.0%, professionals 13.8%, community and personal service workers 11.5%, and clerical and administrative workers 11.4%.
CLIMATE: The temperatures in winter can be bracing and the summers are hot and dry.  In June the average daily temperatures are min 2.6°C, max 13.3°C. In December its min 11.4°C, max 29.2°C.
MAJOR EMPLOYERS: retail, tourism.
SCHOOLS: Two primary schools; one government and one Catholic. The nearest secondary schools are in Rutherglen (19 km) and Beechworth (25 km).
HEALTH CARE: The Indigo North Health is a public, not-for-profit health care service in Chiltern. It provides residential aged care, retirement village living, home-based nursing and community heath services.
PROPERTY PRICES: The median house sale price is $332,000. It has increased by 8.9 % in the last 12 months.
NBN CONNECTION: Fibre To The Curb (FTTC)
SPORT AND RECREATION: Tennis, cricket, football, netball, golf, bushwalking, cycling and fishing. There is a men’s shed and neighbourhood house.
ARTS AND CULTURE: Three art studios, a museum, occasional live music at the hotels, a book club and an annual dance. 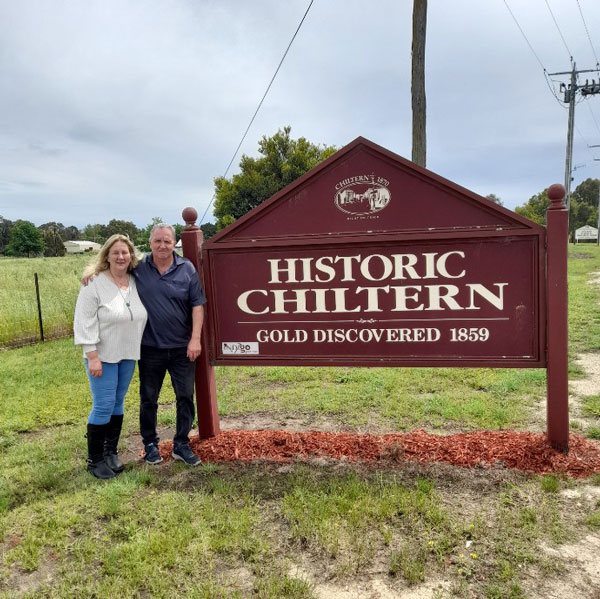 We were living in Melbourne and my partner was hating his job and I was disliking mine, so we were looking for a change. Chris is a panel beater by trade and had his own business and I was subcontracting for a cleaning business. Chris thought a caravan park would be a good idea and we were looking about when an agent said, ‘I’ve got the place for you’. Well, we just said, ‘Where the bloody hell is Chiltern?’

We pretty much drove up here and fell in love straight away and bought the Lydoun motel in Chiltern.

The little main street is so beautiful, the scenery is lovely, everything is, well, taken care of.

We had a few days here with the old owner and they took off and then the phone rang and the guy from the caravan park said, ‘There’s a tourism meeting on tonight’. We were so tired, but Chris said we needed to go. We went down to the meeting in the pub and when we walked in it was like everyone’s arms were open to us. We met everyone; the butcher and the artists, everyone. We joined the tourism board and we go to their meetings – it’s great to be part of it. My advice if you move somewhere new, is to accept any invitation, no matter how tired you are.

We’ve only been here a year, and we’ve had the bushfires and now COVID. It’s been a hard year, but we don’t regret our decision at all.  We love the hot summers and we love the winter and we’ve had so much rain this year – everything is beautiful and green.

Chiltern is smack-bang in the middle of other great places like Beechworth and Rutherglen and is known for bird-watching and cycling.

It’s definitely great having the train line here which makes us accessible for people in Melbourne. That’s a real bonus. And it’s only 20 minutes to Albury-Wodonga and there is everything you might need there.