It’s a fine life in the city by the bay

Geelong is a founding member of the pretty-much-has-everything club. It has all the trimmings of a big city, but none of the trappings, with world-class businesses, impressive education choices, great food and an engaged artistic community.

West from Melbourne, Geelong is Victoria’s second largest city. Its population has increased by 14 percent over the past five years, making it a far bigger city than Hobart and Darwin. According to the latest REA Insights Regional Australia Report, Geelong is the tenth fastest growing area in the country, with only parts of Melbourne, Brisbane and Sydney seeing bigger percentage increases.

The heart of the city is a north-facing bay and vibrant foreshore that has risen from an historic port. The area has been the focus of multi-million development projects over the years. Today it has major tenants such as Deakin University’s waterfront campus,  a major hotel, restaurants, a carousel, yacht club, beautifully maintained leisure areas dotted with public art; and a wedding and corporate events centre perched at the end of the pier.

Geelong has a proud history in the development of Victoria. Its port and river were instrumental in the wool and gold trade and as such there are many beautiful colonial buildings. The pain of losing traditional manufacturing in recent years is dimming as carbon-fibre technology and renewable industries set up business in the city.  The former Ford Factory, for example, is now a manufacturing hub for wind turbines and the city will build the largest lithium-ion battery in the Southern Hemisphere as part of the State’s energy plan.

The historic Federation Mills in North Geelong has been transformed into an innovation precinct. The award-winning 50,000sqm site is home to 50 businesses, an onsite incubator and co-working spaces. Geelong is a professional services town too, as many Melburnians followed their jobs when the State and Federal governments moved the Transport Accident Commission, the Australian Bureau of Statistics, WorkSafe and the National Disability Insurance Scheme NDIS offices to the city.

The city has a wealth of education institutions. In addition to Deakin University, there is The Gordon, a major TAFE college, Marcus Oldham, an agricultural and equine business management college, and an impressive range of private and government primary and secondary schools, including Prince Charles’ alma mater, Geelong Grammar School.

‘Geelong offers most of what Melbourne has, but it is missing the chaotic congestion of that city’s traffic. It’s possible to drive from one side of the city to the other within 15 minutes. And for commuters, it’s a dream with regular train services and a passenger ferry delivering them to Melbourne in an hour.

One of Australia’s premiere football teams, the Geelong Cats, has its home base in a state-of-the-art stadium near the Barwon River. The success of the Cats means success for all sports fans with the stadium bringing famous cricket, rugby and soccer teams to Geelong. Geelong has a range of great sporting facilities, hosting the UCI World Cycling Championships, rowing regattas and more.

Foodies are spoilt for choice; a favourite spot in the heart of the city is Little Malop Street. Go for ramen, gorge on fried chicken or drink wine and graze on charcuterie. The coffee culture in Geelong rivals the Melbourne scene. Local roaster, Coffee Cartel, supplies cafes throughout Melbourne and their flagship store is located in the Geelong CBD.

Geelong hosts a number of festivals. There’s a week-long yachting regatta and The Festival of Sails that attracts thousands of people to the region. The city also hosts literary and cultural festivals throughout the year, including the Word For Word Festival.

The architecturally-stunning trio of the Geelong Arts Centre, Geelong Library and Geelong Art Gallery form the heart of vibrant arts precinct. The performing arts is an important part of the city’s culture and the arts centre attracts professional productions and artists from around the country and supports a thriving amateur theatre community.

One of the great assets of this region is  geographical diversity. It takes in urban, rural and coastal areas and the buoyant tourism industry promotes a plethora of experiences. Within a short drive visitors and locals alike can enjoy well-known wineries along the Bellarine Peninsula and world-class surf breaks at stunning beaches along the Great Ocean Road. The opportunity to live so close to the natural beauty that attracts people from around the world, is undoubtedly a drawcard for new residents.

Geelong offers most of what Melbourne has, but it is missing the chaotic congestion of that city’s traffic. It’s still possible to drive from one side of the city to the other within 15 minutes. And for commuters, it’s a dream with regular train services and a passenger ferry delivering them to Melbourne in an hour.

The city also benefits from an international airport on its doorstep. Avalon Airport has up to six flights a day to Sydney, transporting 50,000 passengers a month on that route alone. Other popular routes fly from Avalon to the Gold Coast, Adelaide and Kuala Lumpur.

Local real estate agents are seeing a surge of interest from Melbourne buyers in recent times. Median houses prices range from $365,000 in the northern suburbs to $927,500 in Newtown which is close to the CBD, and over a million dollars down the coast. According to realestate.com.au, Geelong’s median house price is $811,750 and the median rental price for a house is $415 per week.

The Traditional Custodians of the land on which Geelong stands are the Wathaurong people.

WATTLE ROAD 🖤  Set between Melbourne and the south-west coast of Victoria, Geelong is a beautiful, diverse city packed with opportunity.
DISTANCE FROM MELBOURNE: 75kms
POPULATION: 310,000

MAJOR EMPLOYERS: Barwon Health, Deakin University, Department of Education & Training, City of Greater Geelong, government organisations such as CSIRO, TAC, NDIS and WorkSafe and the tourism sector.
SCHOOLS: Within 15kms of the Geelong CBD, there are 10 public, three private and nine religious secondary schools. In total the region has more than 40 primary schools and 23 secondary schools.
HEALTH CARE: The Geelong region has four hospitals: Geelong Hospital and University Hospital are run by Barwon Health; and St John of God and The Epworth are privately run. Barwon Health also operates the Andrew Love Cancer Centre, the McKellar Centre for aged care and rehabilitation, a psychology clinic in partnership with Deakin University and community health services across the region. The city also has the Geelong Clinic, a 52-bed mental health hospital. The region is fortunate to have a depth of medical specialists and allied health services.
NBN CONNECTION: Fibre To The Node (FTTN)
PROPERTY PRICES: Median houses prices range from $365,000 in the northern suburbs to $927,500 in Newtown, a prestige suburb close to the CBD, and over a million dollars down the coast. Geelong’s median house sale price is $811,750 and the median rental price for a house is $415 per week.
TRANSPORT: Bus line to all local suburbs; six train stations; hourly trains to Melbourne; and daily schedules to other regional towns such as Warrnambool and Ballarat. Avalon Airport provides six flights to Sydney per day and also flies to Gold Coast, Adelaide and Asian destinations including Kuala Lumpur.
SPORTS & RECREATION: There are many Football and Netball clubs as Geelong and the region is home to three leagues. The Geelong Football Club’s main stadium, walking distance from the CBD, is a local landmark.  Geelong also has a keen basketball community, rowing clubs and a beach volleyball stadium with social and club teams.
ARTS & CULTURE: The city is home to the Geelong Arts Centre, one of the biggest regional arts centres in Australia.  The city has an impressive number of active theatre groups;  the Geelong Art Gallery, small independent galleries and cinemas including The Pivotonian which shows independent and world movies.
COUNCIL: geelongaustralia.com.au 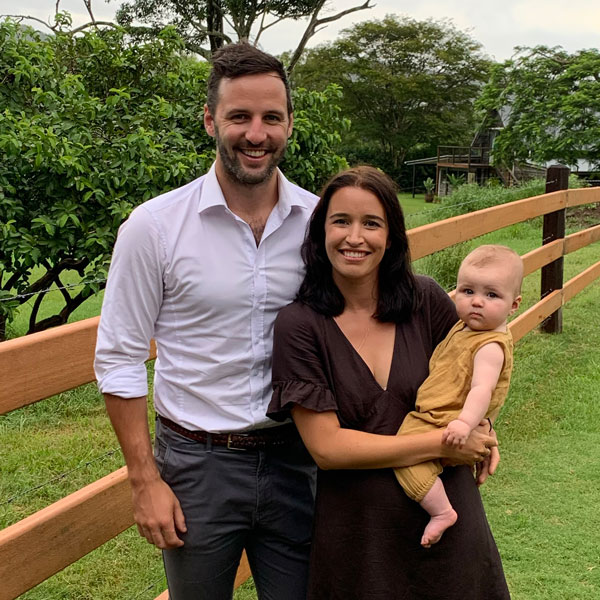 I grew up in Geelong and I loved it. I went to school at St Joey’s and played my footy there too, but once I made the move to Melbourne, I honestly didn’t think I’d come back. I run a tech company called Rosterfy, with clients all over the world, so while we loved Melbourne we were also considering living overseas.  Three years ago we bought an investment property in South Geelong, put tenants in it and it sort of just chugged along by itself. Then we got pregnant and we thought it might be nice to move closer to family – my wife’s family are from the coast. So South Geelong was sort of perfect – close to family and close to Melbourne. We renovated our house and moved in and this year has been great.

We can walk to the river, walk to Eastern Beach, there’s plenty of places to go with Eve, our baby. Geelong has been great for that. We’re close to family, but also the mothers’ group we’re a part of means lots of support for us being brand new parents. My work is easily done from home. I have lots of online meetings and Melbourne is close when I need to pop into the office. We feel supported by the local business community too and look forward to getting more involved.

One thing that we loved about Melbourne was the South Melbourne market and I definitely thought I’d miss the food, but South Geelong Primary School has a market every second weekend that fills the gap. I’ve also enjoyed getting into golf – 13th Beach and Barwon Heads are two great courses which are a short drive from here.