Landing on the right design

One of the happiest days on the Wattle Road journey can be finding your new home – but what if it’s a block of land, not a house, that wins your heart?  Here’s some options that will cost less and have you moving in quicker than if you built

When it’s a perfect piece of land that tickles your Wattle Road adventure, does the thought of building your dream home put you off? Or even after watching season upon season of Grand Designs – of course, ‘they won’t be in before Christmas – does the hankering persist?

Amazing discovery one: You don’t need an architect to build a house. Amazing discovery two: Someone else has already done that, and you can just buy the fruit of their design experience in the shape of a modular home.

The less attractive descriptive is ‘pre-fab homes’, but that evokes dowdy images from the post-war era, and the expression is now pretty much verboten.

The twenty-first century take on the concept is not only devilishly good-looking, but also extremely robust and a relatively quick track to take from landowner to resident. It also delivers cost savings in building off-site – there’s no material overruns, no weather hold- ups and no need to track down good tradies in a remote and unfamiliar location.

Without trying to sound like the cheer squad for the whole industry, I can’t help but add, the materials used are ecologically-sound and finally, there’s no need to site manage.

With modular homes there is still wiggle room to tweak existing designs to make the final home suit your needs. I speak from experience when I say that thinking, for example, that you won’t need a full-on kitchen because, `it’s just the country house’, is wrong.  The experienced people we’re talking about here will tell you that as well – so don’t make my mistake and think small!

As with any product range there are huge variables, so there’s no easy way to answer the inevitable question, how much is a modular home? You will no doubt enjoy exploring the online galleries of modular home providers and become inspired to make enquiries. Just remember, it is a bit like very expensive Lego, where adding an extra module is relatively simple 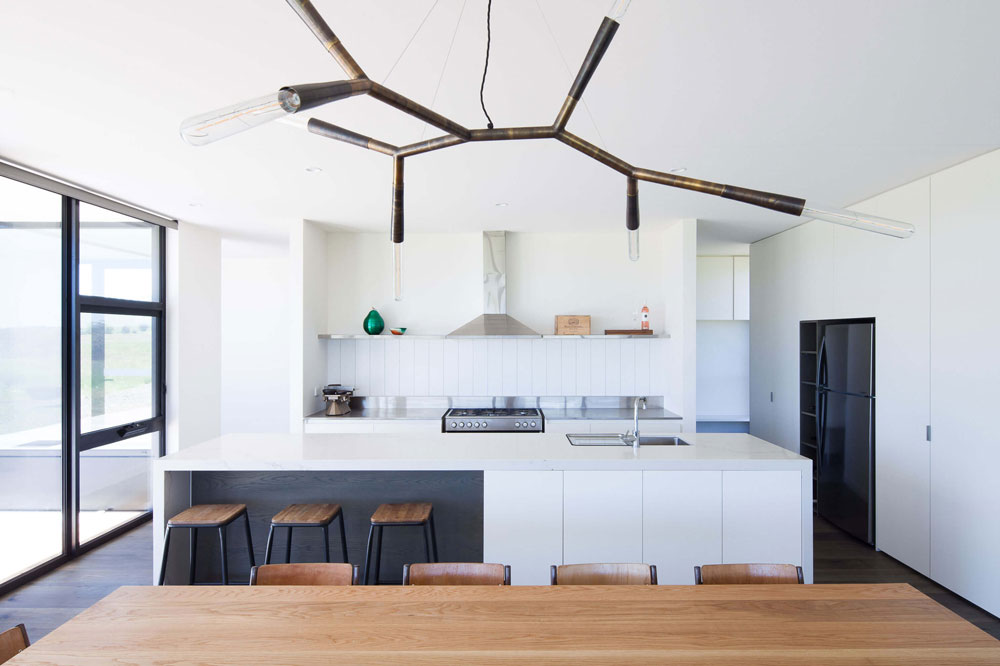 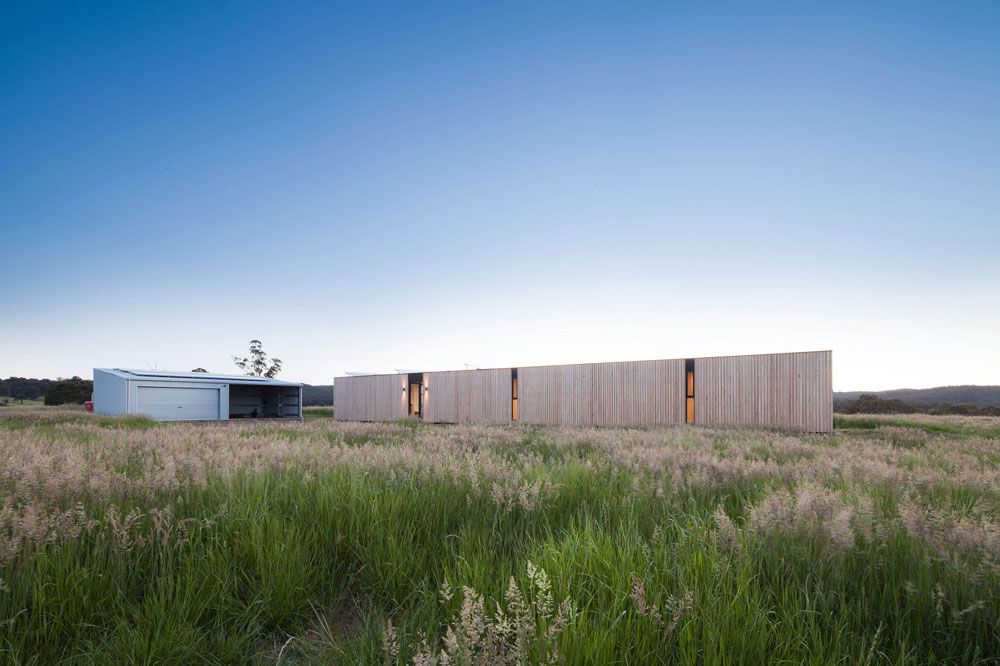 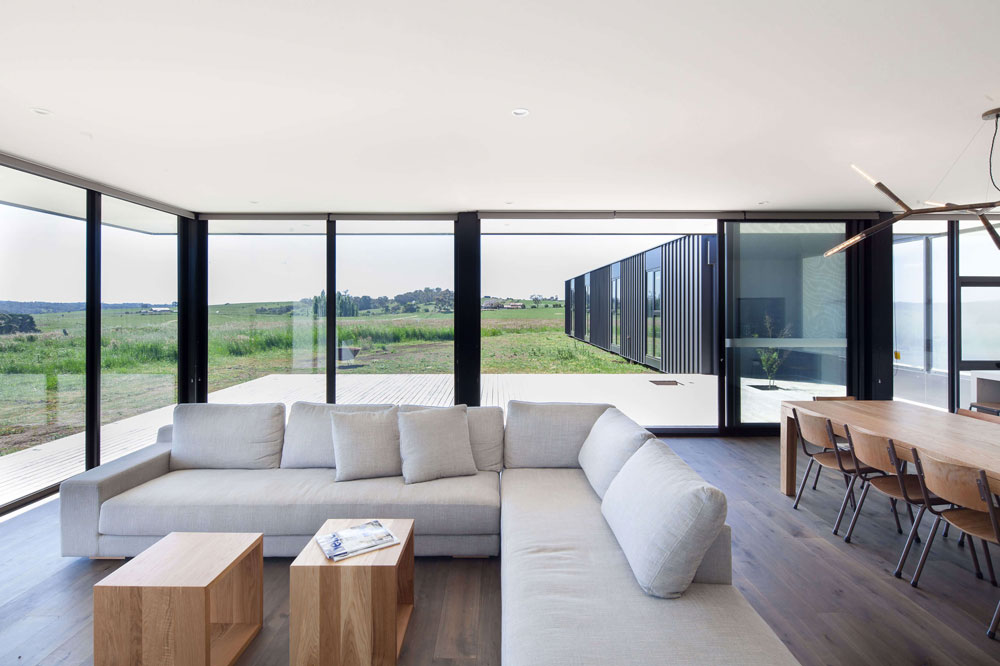 The beauty of modular homes

The impressive Modscape offers bespoke design, with their pods arriving onsite completed right down to the toilet roll holders. A ball park figure for their work starts at around $3000 per square metre.

Their Merricks Beach house, which sleeps 14, is next-level living. So organic in design, it fits effortlessly into the landscape. In the same relentlessly peaceful style, gaze upon the really paired back Franklinford home – completely off grid, and a study in elegant simplicity.

Make sure you check out the great range on  Ecoliv Sustainable Buildings. You can view multiple designs on their site, with measurements and prices. Their Flowerdale project? It’s fab – complete with pool and pool room and priced at $565-$699k. Ecoliv’s newest build, is the very clever Kilcunda Project – steel, timber, cool interiors and sustainable at every turn.

The captivating MODE homes build their homes in an origami fashion – they sort of ‘unfold’ when they reach location – which promises a shorter erection time-frame. 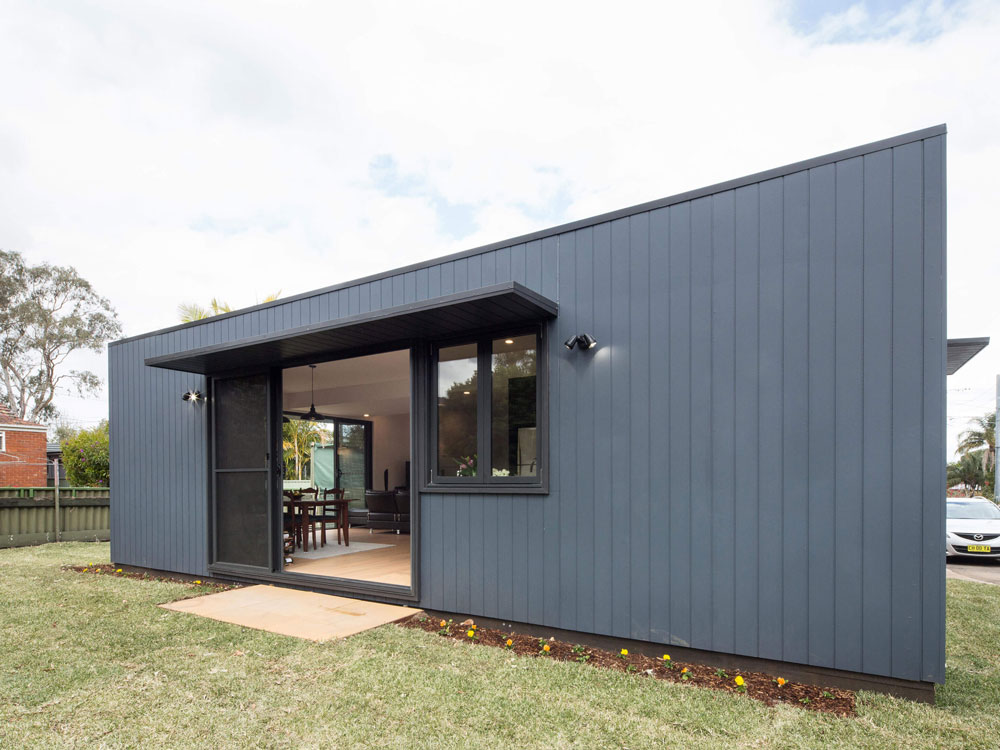 MODE homes build their homes in an origami fashion – they sort of ‘unfold’ when they reach location. 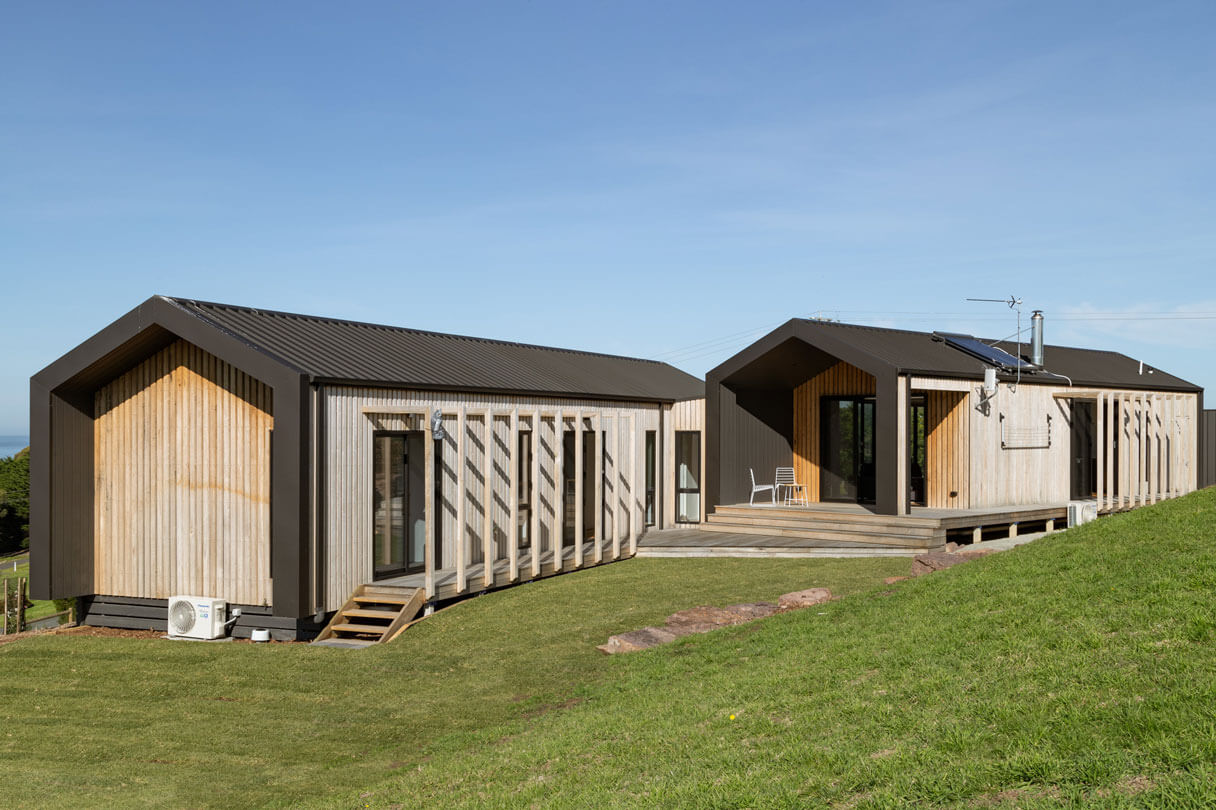 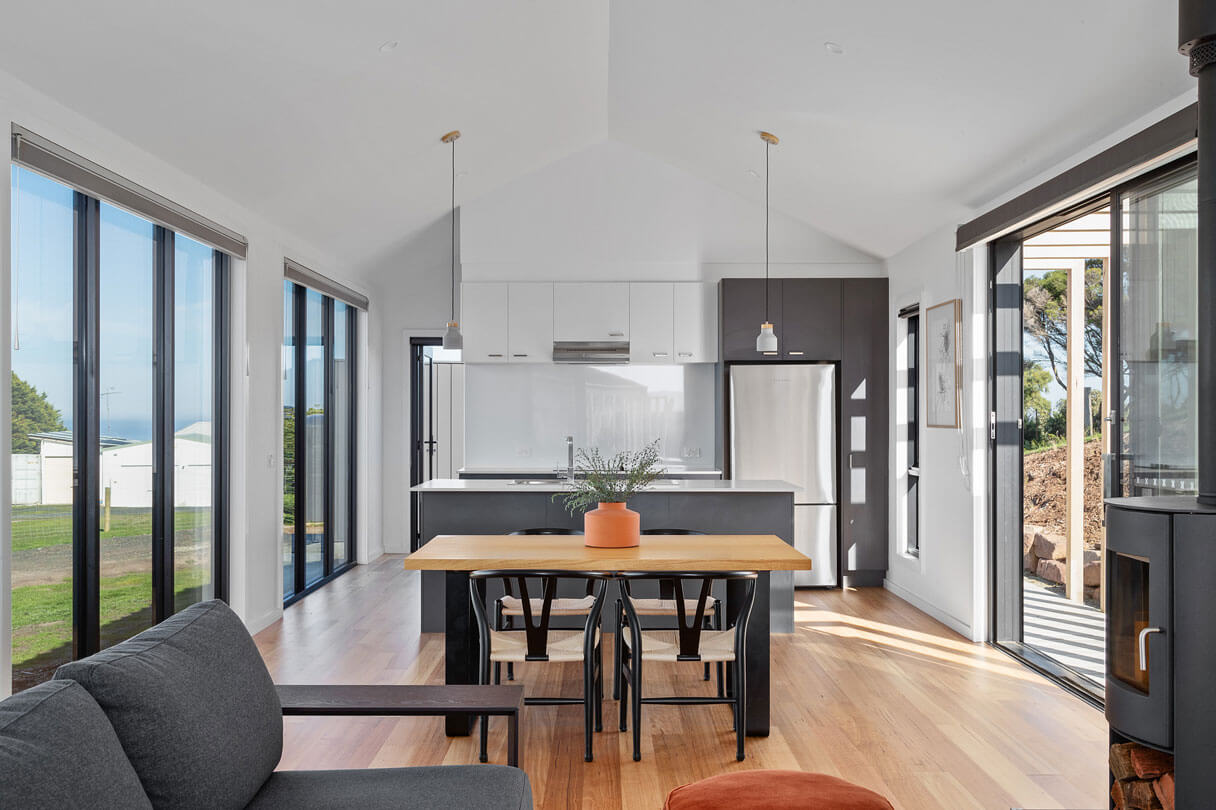 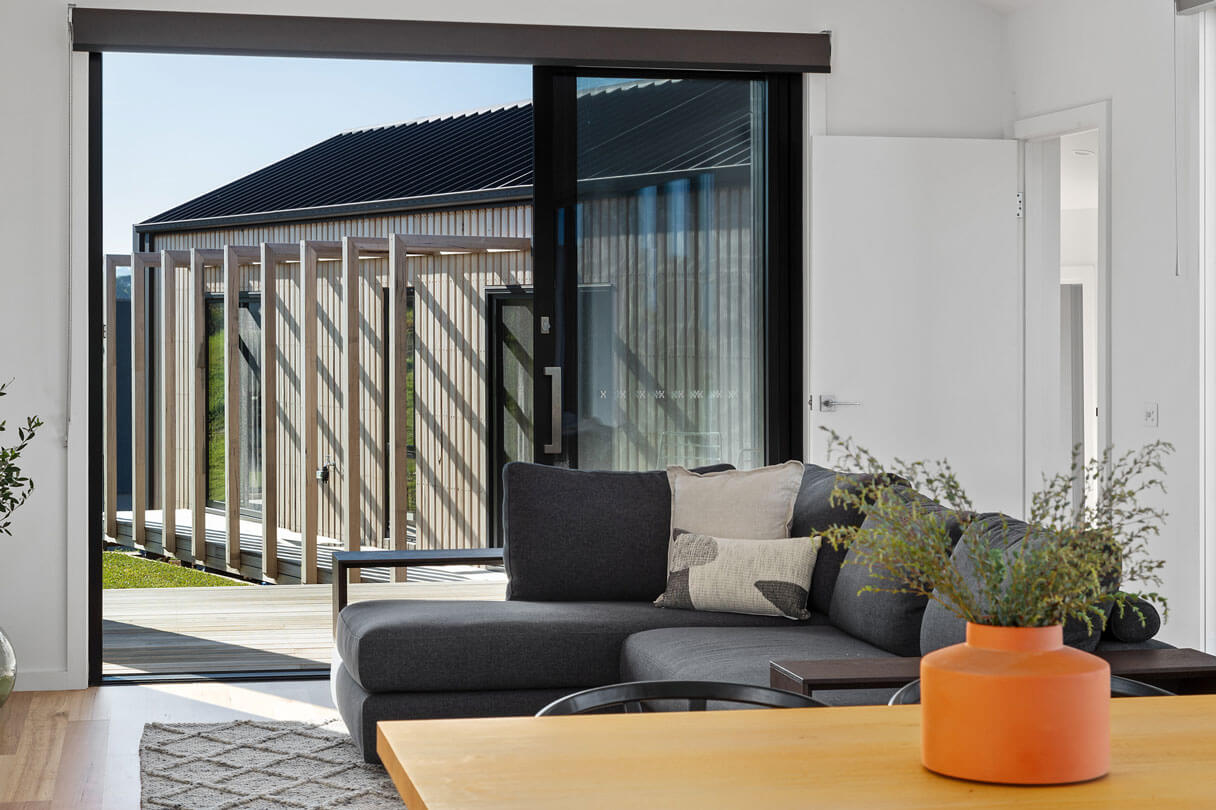 Why not consider thinking outside the box – or indeed, container. Yes, shipping container homes are ideal for a quick fix, and are low stress from a design point of view because options are fewer.

A sole container is about 6m long, (cosy cabin sized) and is easily transported. By the time you add full-length glass doors and windows, the ‘simple life’ no longer looks like a container. Especially if you clad the structure in some lovely timber.

Container Build Group, has an opening price tag of just $17,500. However, this company also offers cabin-sized homes, fully fitted out into a Tiny House / studio form. They come with a custom kitchen, laundry, a lounge and bedroom, plus a bathroom designed to work around the waste options available at your dream location. No, you don’t need a sewer connection if you get organised.

All that with a ten-week delivery schedule, and so inexpensive you might be able to stretch for another container home for visiting family and friends, or to run as an Airbnb.

Add on a veranda, or a deck, which takes little extra cost, and you have an uncomplicated retreat with outdoor living areas.  Add on another container, or two or – what the heck – four and you have a big house

Two-storey container homes, the Crystal Palace and Cronulla, from the Container Build Group.

How about a roundhouse or yurt?

And finally, if the vibe you are feeling is more tie-dyed, or indeed Bedouin – have you considered a yurt or a roundhouse?

Australian Roundhouses are, as the name suggests large round homes, clad in timber ‘facets’  (an 8.4m roundhouse is constructed with 22 sides or facets) that while similar from the outside, offer unlimited possibilities inside. This is a kit-style home – with all materials, unassembled, delivered to site and constructed there.

The yurt is a different concept entirely. Some people call them tents, but while that’s a fair comparison, it’s not accurate. A yurt, which originated in Mongolia, has four or more layers to the ‘walls’ –  no beastie is getting easy access to a true yurt.

Again, we’re talking round, but yurts, which need a decent pad/deck/base upon which to rest, can be constructed with a minimum team of four helpers, in one day. Unless of course you are building a really big ‘un, with a mezzanine level, or ramps or extensive decks and that’s going to cost more than a slab of beer to get built. Check out Yurts Sydney, or  Blue Mountain Yurts, and discover all sorts of fun yurty facts.

Starting price from Yurts Sydney is under $8k for a basic, four-metre yurt. However, custom designed yurts, with soaring ceilings and stunning details are a far costlier option – but easily accomplished. Maryanne Harkins of Yurts Sydney has been very busy with new clients since Covid19 struck, designing custom homes for folk keen to escape the city as soon as possible. She promises guidance and great ideas for the uninitiated.

It almost goes without saying, but even in the most distant of paddocks, the long arm of bureaucracy will find you, so some checks have to be done for occupation certificates. But all the people we’ve mentioned in this article are wizards at such things, and will either include that in their package, or at worst, point you in the right direction. 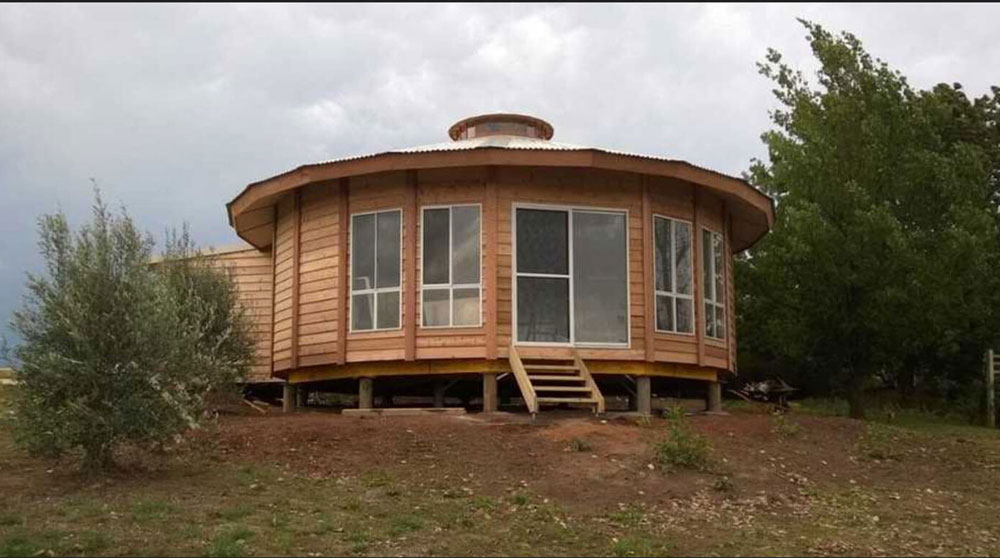 Starting price from Yurts Sydney is under $8k for a basic, four-metre yurt. However, custom designed yurts, can include soaring ceilings and stunning details. 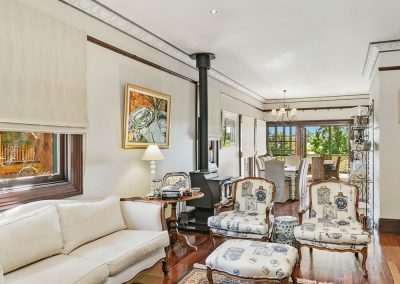 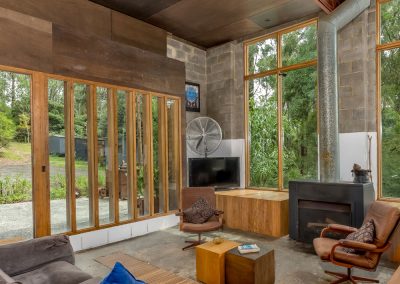 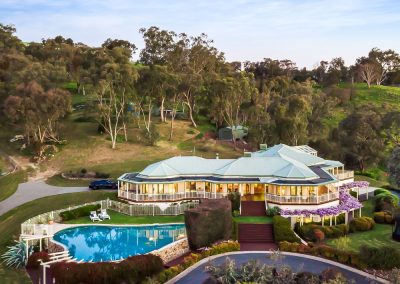 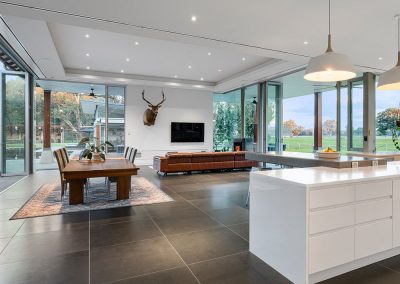