A decade ago, Melbournians Tanya Harkness and Anthony Alfirenko packed up their two children and a successful psychology practice for a new life in a small coastal town

Tanya Harkness could never shake her fond memories of carefree summers in sleepy Apollo Bay. The pull was so strong that 10 years ago the psychologist and her husband Anthony (both born and bred Melburnians) packed up their two small children and left the city behind them.

Back then, the small coastal town along the Great Ocean Road had a permanent population of just over 1000, but a summer time residency of many more. Today just over 1500 people call Apollo Bay home and it still bursts at the brim during the warmer months as road trippers navigate the famous thoroughfare.

A decade on and Tanya says her business is booming, Anthony has discovered a new career and her children are thriving. And as for Melbourne? Although Tanya says she’ll always love the city she grew up in, she admits she would need to be dragged “kicking and screaming” back there for a permanent move.

Why did you choose Apollo Bay?
My family have always holidayed here, even my husband always surfed here, so both of us had a preexisting love of the area. Even though we had a wonderful life in Melbourne, the decision was primarily about the children. We really wanted them to grow up around nature. I was also becoming increasingly concerned by the competitive aspect of living in the city. I wanted them to have a more developed sense of ‘other’, that’s why we chose to live in a smaller community where people are just more connected.

How did the kids handle the move?
They actually wanted to be down here. My son was seven when we moved, and my daughter was four. She loves it here, but at the time she wasn’t really conscious about the move. My son desperately loves it here because he’s very outdoorsy. For him it was where he could just be outside surfing and swimming. He’s in the ocean every day, no matter how cold it is.

What kind of an outdoor life did you have in Melbourne?
We were in the eastern suburbs and had a quarter acre block surrounded by parks, but it was still suburban with neighbours all around you. I think it was the pull of the ocean that got to us and the idea that nature is bigger than you.

Was the decision to move a quick one, or did it drag out?
We looked at properties for a while. My husband was very keen on getting a hobby farm. We were in contact with a local real estate agent down here who would let us know if something came up, and then something finally did. It was the right place, right time. Ultimately, I think it was about five years that it was on the cards, but we weren’t in a rush, we were waiting for the right property.

Did you consider renting until you found your dream home?
No, we jumped right in, but we knew this was where we wanted to be. We weren’t very keen on renting, and the rental market down here is limited because there’s just such high demand. Agents will often say, “Yes, you can have six months during winter.” But as soon as the sun comes, they want you out because they’re going on Airbnb.

How did you know it was the town for you?
We would spend every January here, and I’d basically camped down here from the age of three or four. I’d just had those absolutely idyllic summers, it’s always been a place I’ve felt connected to. And then we started discovering other people who moved down here with very similar experiences. 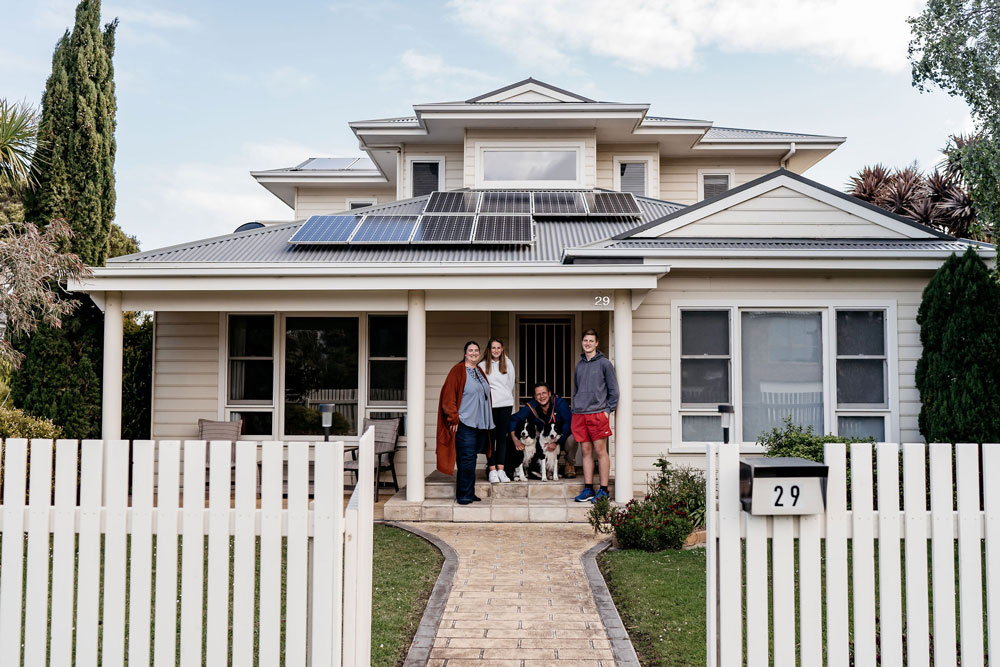 Psychologist Tanya Harkness with her husband Anthony and their children Josh and daughter Tashi.

People often covet the place of their childhood holidays, but real life isn’t always like that. How do you think people can avoid sea or tree change regret?
If you think it’s going to be like that January when you were seven years old, then yeah, you’re going to come down for a crushing defeat, aren’t you? There can be downsides to living in a small community. Some people can find it somewhat stifling – the fact that everyone knows your name. If you’re someone who thrives on constant stimulation, a sea change is probably not going to be your thing. If you’re someone who thrives on community, connectivity and nature, then I think it will work for you.

Is there a right or a wrong way to make a sea or a tree change?
Try and find a balance between your head, your heart, and your gut. But also do your research on the area. If you just go in cold, then you might regret it. I think if you’ve studied the area, and you’ve stayed there for extended periods of time and talked to locals honestly then that helps the decision making. I’m also a big fan of the old ‘pros and cons’ checklist too.

Do you think sea and tree changers can suffer a bit from culture shock?
There’s this misconception about the divide between cities and the regions. There’s an entrenched concept that the city is where it’s all happening and if you leave then you’ll be going backwards, you’ll miss out on opportunities, it’s not cutting edge enough. If you actually spend some time in the regions you’ll realise that’s just not true.

How did you and your husband discuss the future of your careers?
I was ready to go, but career-wise for him that was different. He was working in the automotive industry, an industry that was fairly terminally ill. He was in his early-40s around this time and he completely changed industries. I think if we’d stayed in Melbourne he would have stuck to that corporate world and I don’t think he would have had the job satisfaction he’s got now. He’s actually now the general manager of the local coast committee here and is now so dedicated to the job and the numerous community organisations he’s involved with that he was finding less and less time for the farm. We made the decision to sell that up and buy a place in the township, which we love.

What do you say to city slickers who feel that moving regionally is career suicide?
People shouldn’t buy into the myth that all the good jobs are in the city, because they’re just not. It’s this sense that you’re almost opting out, or taking the lazy way out, and you’re stopping yourself from succeeding. It comes down to what your definition of success is. I definitely took a pay cut moving here, but I just asked myself; how much do I really need versus how much do I want? At the end of the day, you have to weigh up what’s going to be more important. Is it the status and the salary, or is it that ability to adapt your lifestyle to the way you’d really like to live?

Did you fear that a regional town would be limiting for your children?
That’s one of the big things that frustrated me; when people asked “How could you take your kids into the country, what about schooling? Oh, your kids won’t have as many opportunities if they go down there.” My response was always, “Let’s define what ‘opportunities’ actually means.” Yeah, they probably won’t have 5000 extracurricular alternatives, but then they’ve got opportunities in terms of being able to surf, ride mountain bikes and all of those things you’d struggle to do as much of in the city. Don’t assume that opportunity is the exclusive domain of the cities. I really think we’ll probably have to be having different conversations about regional Australia in a decade or two. 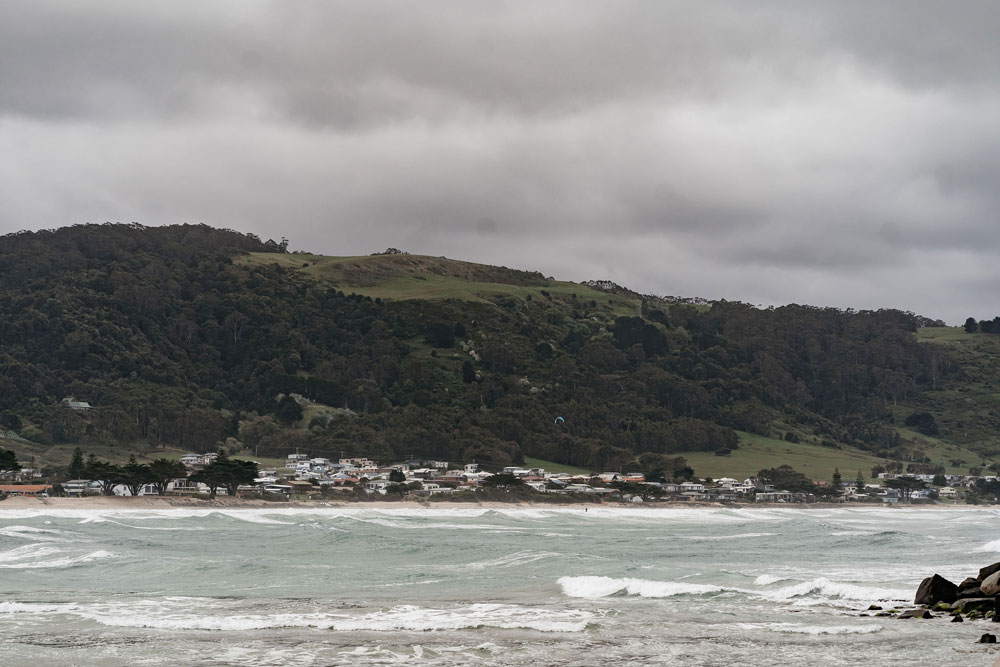 Tanya’s tips for a successful seachange

Ask yourself why you want to make the move
If it’s about leaving somewhere, then it’s probably not the right decision. If it’s about moving to something, I think that’s a different way of looking at it.

Spend some time and speak to the locals
Do a little bit of research about what’s happening within the community, because these smaller towns can have very active community projects and groups. Those groups really give you a good sense of how that community operates.

Encourage older children to get involved
I think it all depends on the teenager. If they’re someone who really embraces the outdoors and is quite active then it’s going to be an easier transition than for a kid who’s possibly more ‘indoorsy’.
It comes down to the family just talking with each other and managing expectations as well.

Be prepared for a social life shift
A lot of your city friends will have the expectation that you come to them, not the other way around – except maybe in January! There is the notion that, “You moved away, so you’ll be driving to us.” That surprised me, I didn’t anticipate the onus would be on me to do the catching up.

Expect your priorities to change
I’ve changed a lot since living down here. Who I was 10 years ago, versus who I am now, has changed. A lot of stuff that some of my city girlfriends still find incredibly important, is stuff I don’t dwell anymore. 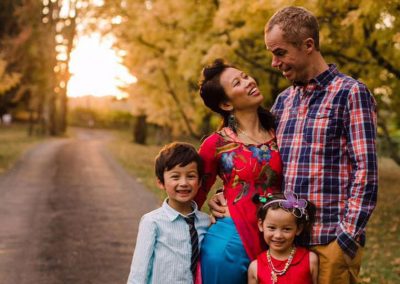