Living in Torquay is like being on holiday all year round. Famous for its beaches, surf culture and natural beauty, the town’s population has doubled since 2006, but it retains a leisurely vibe.

The easy commute to  Melbourne – just an 80 minutes drive –  and Geelong, only 20 minutes, has attracted people seeking that longed-for, work-life balance.

Torquay first became a popular holiday spot back in the 1920s. By the 1960s it was a thriving surf town. Home of the famed Bells Beach, the first surfing event at the renowned break was held in 1961. Just seven years later local surfers Doug Warbrick and Brian Singer started the now global Rip Curl brand in Torquay, where its headquarters is still located. Quiksilver was established in the town not long after by Alan Green and John Law, two surfers who were keen to make some money and surf every day.

The Rip Curl Pro at Bells Beach continues to draw tens of thousands of tourists every Easter to watch the world’s best surfers battle it out for the bell.

Construction is the Surf Coast’s next biggest employer, which is no surprise given the number of new housing estates opening on the north side of Torquay.

As the town’s popularity has soared in the last decade, so too have house prices. The median house price currently sits around $840,000, with an average annual growth of 5.42% per year. 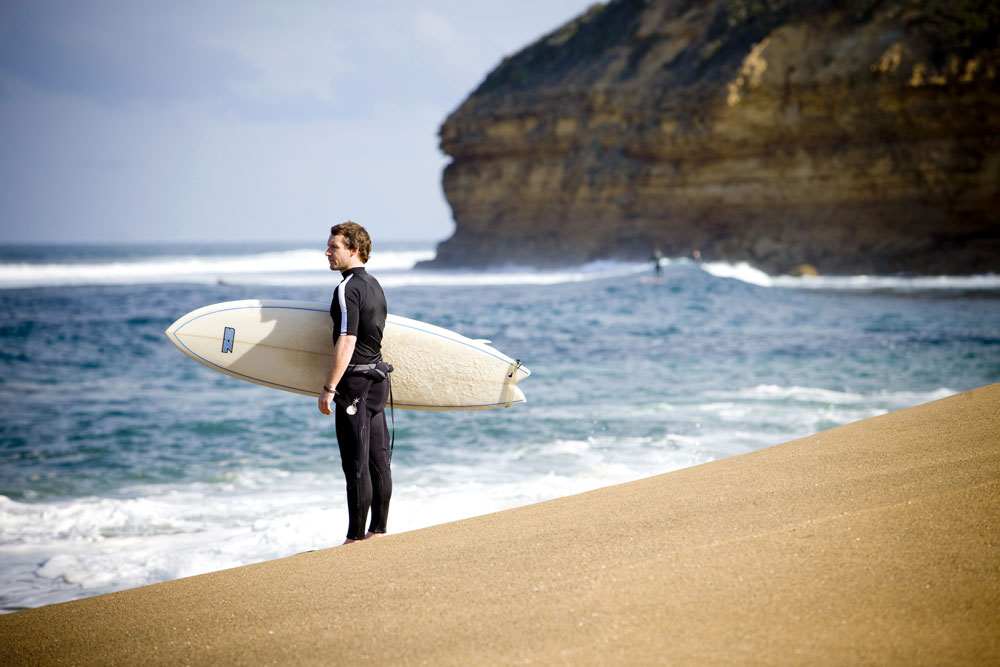 “Many of the town’s original properties have either been renovated, rebuilt or their generous blocks subdivided, but there remain a number of diamonds in the rough, with retro facades and huge backyards, bursting with potential.”

Houses in the ‘north’ are all next-to-new, while Old Torquay offers a mix of contemporary and character homes. Many of the town’s original properties have either been renovated, rebuilt or their generous blocks subdivided, but there remain a number of diamonds in the rough, with retro facades and huge backyards, bursting with potential. The fringes of Torquay offer acreage properties, still just minutes from the beaches.

With Torquay North’s continued growth, a shopping precinct was established to service the area, separate to the town’s main shopping spots.

Torquay’s central shopping strips are on Gilbert St and Bell St. While Gilbert St is now largely focused on business, with new office spaces recently opening and two banks, a butcher, pharmacy, newsagent and post office nearby, Bell St is lined with boutique clothing and gift stores, as well as on-trend restaurants and the award-winning Blackman’s Brewery. The esplanade is also lined with high-quality restaurants that enjoy stunning ocean views.

Surf City Plaza is a huge attraction for locals and visitors alike, with iconic surf brands in large retail spaces, as well as cafes, restaurants and bars. Just around the corner is the popular Baines Crescent, where you can score hugely discounted surf wear from the seconds shops.

The Australian Surf Museum in the Surf City, is a wonderful tribute to surfing from its early days to the present.

Despite the growing population, the sense of community in Torquay is as strong as ever. Both the Jan Juc and Torquay surf clubs have a significant presence in the town and provide beach patrols over summer. Torquay also has passionate football, netball, cricket, soccer and lawn bowls clubs, to name a few. There’s also an indoor sports and recreation centre.

Surf Coast Arts Inc, a volunteer-run community group, focuses on developing the arts in the Surf Coast and manages the popular Cowrie Market, held every third Sunday of the month, from September through to April. The Spring Creek Community House is another integral part of the town, offering community programs and services to benefit residents of all ages, from adult arts programs to children’s music mornings – all at a minimal cost.

This family-friendly town offers plenty in terms of education. Torquay currently has five primary schools (two Catholic, two government and one private), as well as two government secondary schools. There are also three medical centres. So, while Geelong and Melbourne are close by, Torquay has absolutely everything you need.

The Traditional Custodians of the land on which Torquay stands are the Wadawurrung people.

WATTLE ROAD 🖤 Torquay has that holiday-feel all year round, yet it provides all the services of a bigger city.
DISTANCE FROM MELBOURNE: 104km
POPULATION: 13,258
WHO LIVES HERE?
According to the 2016 Census:
♦ The median age of people in Torquay is 39 years. Children aged 0 – 14 years made up 22.8% of the population and people aged 65 years and over made up 14.8%.
♦ Of the families in Torquay, 51.1% were couple families with children, 37.6% were couple families without children and 10.4% were one parent families.
♦ 82.6% of people were born in Australia. The most common countries of birth were England 4.1%, New Zealand 1.1%, United States of America 0.6%, South Africa 0.6% and Scotland 0.6%.
♦ The most common occupations included professionals 28.0%, managers 15.2%, technicians and trades workers 13.8%, clerical and administrative workers 11.6%, and community and personal service workers 11.4%.
CLIMATE: Torquay is warm and temperate and has significant rainfall. January average temperatures are 23.6ºC max, 13.3ºC min. July average temperatures are 13.2ºC max, 5.7ºC min.
MAJOR EMPLOYERS: Surf industry, construction & education.
SCHOOLS: Five primary; two secondary.
HEALTH CARE: The Torquay Community Health Centre provides pathology services, optometry, medical imaging and mental health services. Residents can also access diabetes education, nursing, dietetics, physiotherapy, occupational therapy and speech pathology. There are a number of general practitioners in the town. The nearest hospitals are in Geelong: Epworth Hospital is in Waurn Ponds, 19km from Torquay; and Geelong Hospital is 21km.
NBN CONNECTION: Fibre To The Node (FTTN)
PROPERTY PRICES: The median sale price for houses is $840,000 and for units, $665,000. House price values in the last three years have increased 18.7%.
SPORT AND RECREATION: Football, cricket, netball, nippers, tennis, soccer, lawn bowls, basketball, dance.
ARTS AND CULTURE: Surf Coast Arts Inc, a volunteer-run community group, focuses on developing the arts in the Surf Coast; Torquay Art Gallery
COUNCIL: www.surfcoast.vic.gov.au 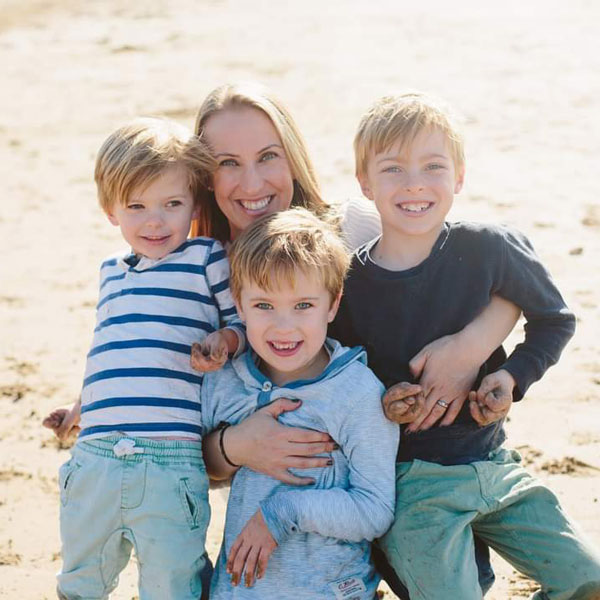 Beach holidays are never long enough. It doesn’t matter how many nights you’re away, you could always stay another. It’s one of the reasons my husband and I made the move to Torquay six years ago.

With two young boys and another on the way, we decided we wanted a more relaxed way of life – with a big focus on the great outdoors. We haven’t regretted our decision for a second.

There are the obvious attractions to a life by the ocean – we can wake up on a Saturday morning and ride to the beach with our now three boys. We can jump in the car and drive to the beach in two minutes flat – morning, noon or night. I get to walk my dog to the beach from my front door, along breathtaking bush tracks, to watch the sun rise over the water to start my day.

But for us it’s also the unexpected benefits that make Torquay such a special place to call home. As well as the usual passionate local sporting clubs, our boys also get to do nippers at the Jan Juc Surf Club, an amazing program which teaches children to respect the ocean, but also how to tackle it.

The primary school our boys attend, St Therese Torquay, includes regular ‘Out and About’ days in their curriculum, where the kids walk to either the beach or a nearby creek in a bush reserve, to play in nature but also observe it. The things they have seen and learnt on those days could never be taught in a classroom.

The population is growing but the community is tight and pulls together when it’s called for.

Sure, we often have sand in the car, in the showers and in our hair. But that’s all part of the fun of living by the beach. Even when we’re not on holidays, we always feel like we are. 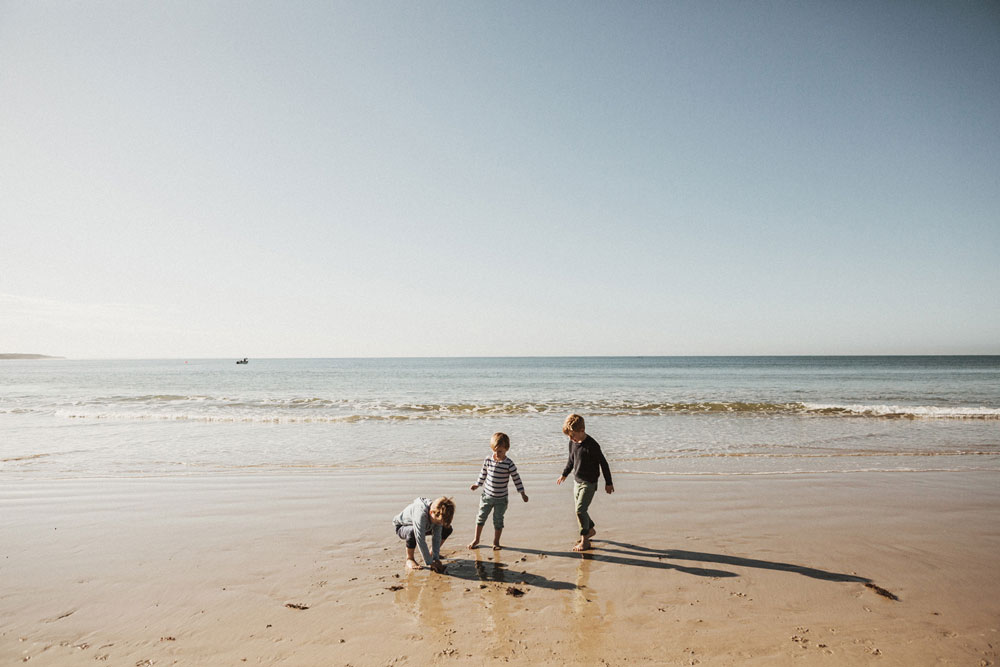