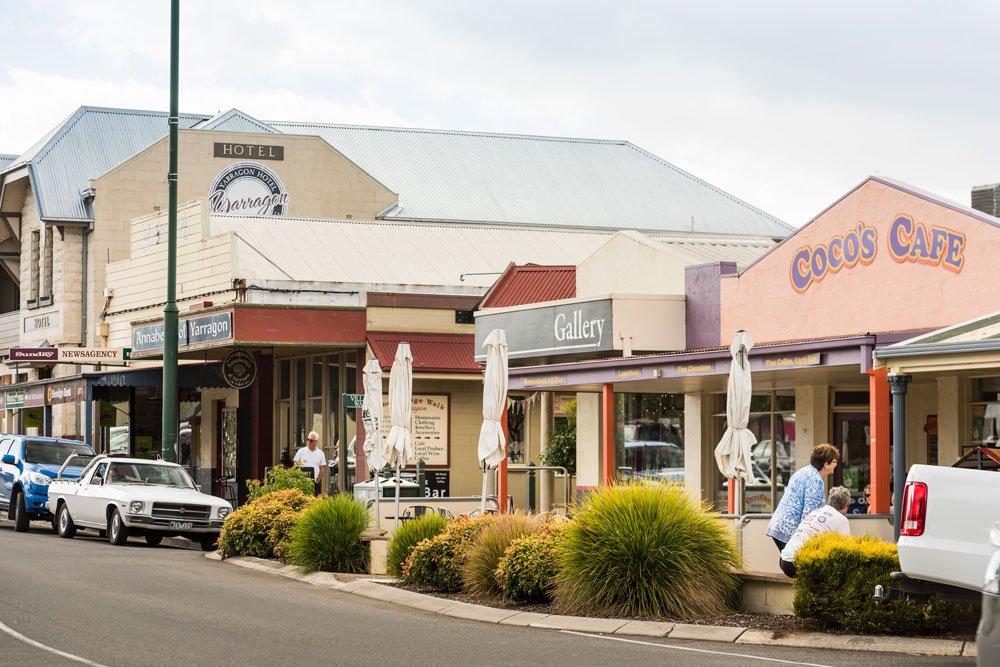 It’s possible to jump on the Princes Highway heading to Gippsland and barely see a traffic light. It’s also possible to bypass any number of towns. And while this can be tempting for the motorist who has a destination in mind and a long way to go, it doesn’t always auger well for the lifeblood of the communities which fall by the way.

Yarragon, with its population of 1,650, is one of only a tiny handful of Gippsland towns not bypassed by the M1. Once a service town for the logging activities in the hills to the south of and for the local dairy farms, Yarragon is now popular with tourists and young families looking for open space and a rural way of life.

In addition to the M1 passing through town, Yarragon also has traffic lights which makes pulling off and breaking the journey easy. Add a well-maintained amenities block, some shopping and food options and space for the kids to stretch their legs and you can see why it’s popular with tourists.

Given all this, and a train station to boot, it’s also easy to see the appeal for residents.

There is a lot to like here. There’s any number of interesting little shops for browsing – shoes, fashion, a chocolate shop, a provedore with a good range of local produce including wine, beer and cider from more than 30 Gippsland wineries and breweries, and tea rooms and cafes. In addition to these more glamourous offerings, the locals would appreciate the pharmacy, supermarket, art supplies, a community garden, medical centre and hall. It’s quite easy to feel civic pride when you can buy locally grown meat, wear locally made clothes and jewellery, and drink locally produced wine.

Opposite the line of shops is a wide grassy verge with a wall memorial, a lovely timber rotunda, a rose garden and a steam train display. On the day of my visit, a bunch of school children with clipboards were scuttling about exploring. A good number of car parking spaces were full and the cafes were doing a roaring trade.

Stretching back from the main street are the residential areas with the soft green hills of the Strzelecki Ranges forming a calming and picturesque back drop. It almost looks like the kind of town a film crew might set up in and produce a weekly drama series (Wandin Valley, anyone? Mt Thomas?)

The primary school, recently relocated, refurbished and extended once the student numbers reached target, is impressive. The early learning centre is situated next door and is of the same high calibre.

The nearest secondary school is 9km away in Trafalgar, or Traf, as the locals call it.

Adding to the beauty of the place is the absence of overhead power lines. It’s something you don’t notice until you do, and then you quietly marvel at the difference it makes. In line with this, a feature is made of the rather attractive street lights.

Yarragon is close to the conveniences and services of the big towns of Warragul and Traralgon but retains a small town feel. It’s easy to forget you’re only an hour or so from Melbourne. Here you’ll know your neighbours, the kids will walk to school and the houses don’t cost an arm and a leg.

Yarragon is on the train line heading further east and to Melbourne in the opposite direction. The train station is also used by community and art groups. There is a monthly community produce and craft market; a medical centre and plenty of sporting groups to choose from including horse-riding.

Mt Baw Baw is only 85 kms away, making the snow sports a viable hobby option for the townsfolk.

While the biggest employers in town are agricultural, primarily in dairy, tourism provides opportunities and with larger towns nearby, many people commute.

The property market is buoyant and prices reflect the increase in buyer demand. In the past three years the house values have increased by 41.6 percent. There are

residential blocks being developed which are large enough for four-bedroom houses while still leaving room for the kids to play. There are also fairly contemporary homes on several hectares on the market.

The traditional custodians of the land on which Yarragon sits are the Gunaikurnai people.

WATTLE ROAD 🖤
Here you can discover the delights of living in a small town, but easily commute for work to Melbourne or the larger neighbouring towns of Warragul and Traralgon. 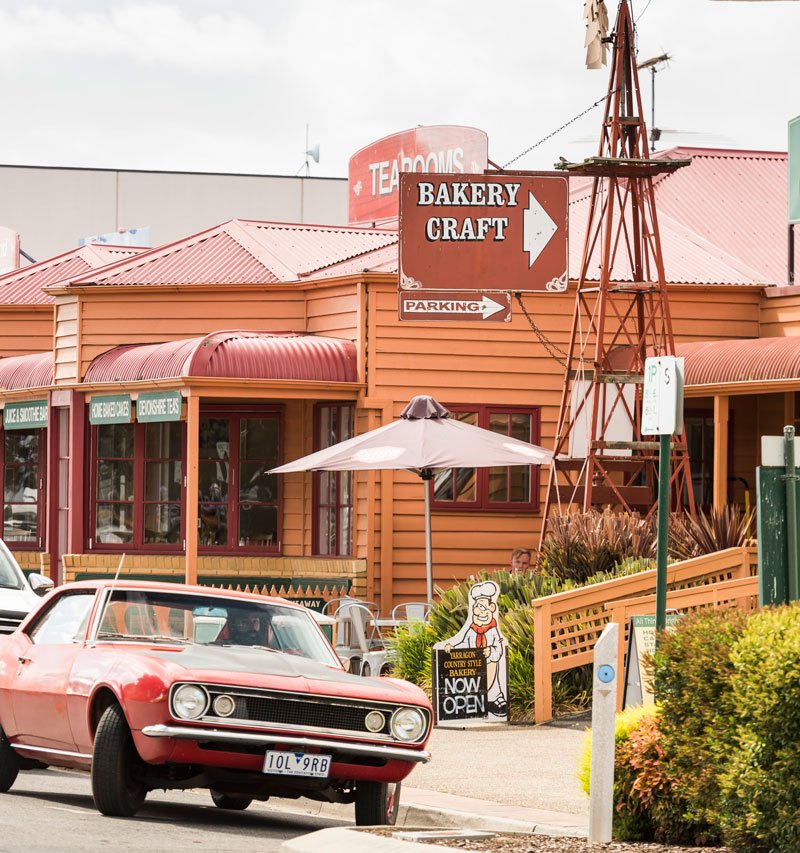 Transport: Regional rail and bus.
Climate: Yarragon has an oceanic climate. There is rainfall during all months of the year. The average annual temperature is 18 and there is about 330mm of rain a year. January average temperature is max 26°C and min 12°C. In July, the average temperatures are max 13°C and min 5°C.
Main Employers: Agricultural, primarily in dairy, tourism.
Schools: The local primary school has been refurbished and extended to cater for a growing student population. There is also an Early Learning Centre next door to the school.
Secondary school students travel 9km to Trafalagar to attend the local high school.
Health Care: The Yarragon Medical Centre provides comprehensive general practice care. The West Gippsland Healthcare Group provides acute medical and surgical, obstetric, emergency, community and aged care in the Shire of Baw Baw; and operates from a number of sites in the neighbouring towns of  Warragual, Traflagar and Rawson. The West Gippsland Hospital is in Warragul, 9km away.
NBN connection: Fixed Wireless (FW)
Property Prices: The median house price is $400,000. The median prices has increased in the last three years by 41.6 percent.
Sports and Recreation: There are a multitude of local sports clubs for seniors and juniors. The community also hosts the Yarragon Market Day and the Yarragon Community Craft and Produce Market.
Council: Mt Baw Baw Shire

JANET
Straight away I liked it here. I was used to a bigger town where no one takes any notice of you. In a small town everyone knows everyone and everything about them. When we had kids, they couldn’t do anything wrong, because by the time they got home we knew about it.
I came here 40 years ago – for love. I’m originally from England and emigrated with my family when I was five. We lived in a lot of places and then ended up in Sale. I fell in love with Paul who was teaching ballroom dancing in Sale and I moved here and lived with his family on the farm.
We opened this shop (Kevin’s Sister) 11 weeks ago. Our daughter, Stevie, had lost her job at Flight Centre and our tenants in this shop moved out because of Covid, so we set up a business here and solved the problems straight away. The locals have been very supportive of us.

PAUL
We rezoned the family farm and had a crack at developing it. There is a lot to do here, a lot of clubs and sports and things. The town is getting bigger and with more growth you get more facilities, so I’m all for it.
I’ve been here all my life. On Saturday nights – when I was a teenager and we weren’t allowed in the pub – my mates and I would play kick-to-kick on the road out the front here. It was the highway at that time. We’d have to get off about every 20 minutes because a car would come through. Now with the freeway, which is the biggest change in the town, you can’t even cross the road.
Yarragon attracts a lot of tourists which gives the town its lifeblood. Those toilets there (he points to the amenities block across the road from the shops) are the most used toilets in all of Victoria. 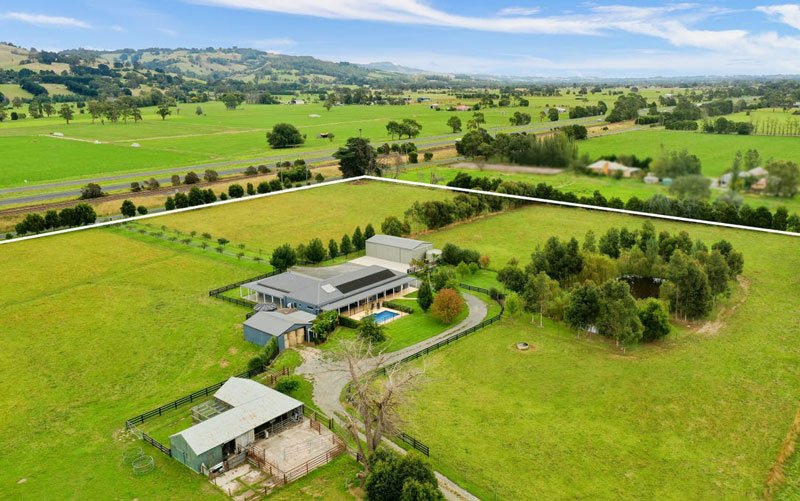 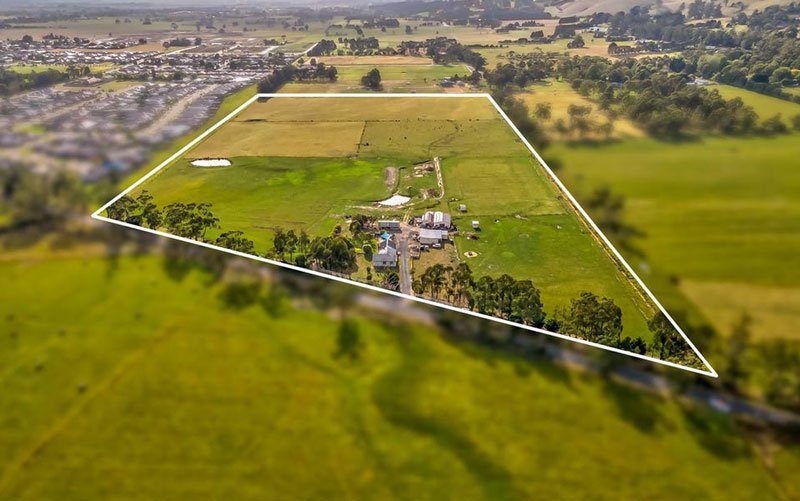